I studied Chemical Engineering at Western Michigan University (Go Broncos!)  For my CHEG 101 class, we were responsible for studying a company that a chemical engineer could work for.  I chose Pfizer because it was close by.  Great reason, right??? (Insert face-palm emoji.)  Through my research, I learned about the many drugs the company created and how they were saving lives every day.  I toured the facility and saw all of what seemed to be miles of piping and huge tanks.  I couldn’t believe that mixing a little of this and a little of that could result in a miracle cure for someone.  This led me to a life sciences degree option, a biology minor, a passion for helping people, and my first job as a validation engineer.

Four years after my Pfizer report, I was now working as a full-time contractor with Performance Validation.  Our main client was, you guessed it…Pfizer.  It was an eerily coincidental turn of events for me.  Validation engineers do what the title implies – they validate that the systems and processes do what the manufacturer claims and expects them to do.  Mind you, when I started, I had no idea what a validation engineer did or what validation even was.  Thank goodness Performance Validation was prepared for this (they were no strangers to making great validations engineers out of new graduates).   The first 3 days of my employment, I learned all about validation – what it is, why it’s important, including a history of the FDA and the Food, Drug, & Cosmetic Act.  Those three days changed my life and helped me realize how an entire industry has been built based on protecting people from what they don’t know.  I wanted to be part of it, and I wanted to be GREAT at it.

Now it’s my turn to share with all of you why the Food, Drug, & Cosmetic Act exists and why there are people who spend every day of their lives enforcing it. 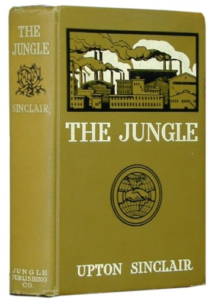 In 1906, Upton Sinclair published The Jungle, which highlighted the horrendous, unsanitary practices in the meat-packing industry.  Sinclair did not hold back.  The scenes are frightening, grotesque, and flat-out disgusting.  It is a very difficult read.  Yet, this book is almost solely responsible for the Pure Food and Drug Act of 1906.  This Act outlawed adulterated and mislabeled food and drug products, allowed for products to be inspected, and required active ingredients to be labeled on the product.

Soon, it would become evident that the Pure Food and Drug Act of 1906 had many flaws.  In 1918, manufacturing began on a product called Radithor, an energy drink also known as “radioactive water”.   This energy drink was religiously consumed by a golfer named Eben Byers who suffered a gruesome death as a result of radiation-induced bone loss.

Another startling event occurred in 1933, when a mascara called Lash Lure was found to cause dermatitis (irritation), ulcers, edema (swelling), blindness, and even death due to an ingredient called PPD (paraphenylenediamine).  The adverse events were published by the Journal of the American Medical Association and brought light to the safety of cosmetics.

The final straw came when the drug Elixir Sulfanilamide was born.  Sulfanilamides were used mainly to treat strep infections and had been used safely for some time.  However, in 1937, over 100 children died from the use of Elixir Sulfanilamide, which contained diethylene glycol (anti-freeze).  The public outcry and devastation of this story quickly led to the creation of the Food, Drug & Cosmetic Act of 1938 - the framework for safety and control of food, drugs, devices, and cosmetics that we still uphold today.

There have been many amendments to the act since its origination.  Unfortunately, regulation has often been reactive as opposed to proactive.  Tragedy led to transformation.  Now, people like myself dedicate our lives to preventing this from happening.  Regulation is not burdensome – it is necessary.  It shouldn’t take a child dying to realize that.